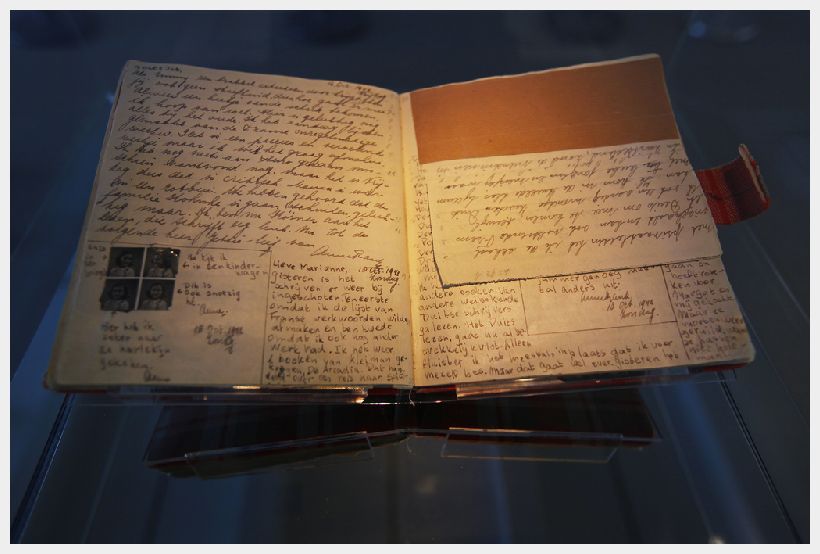 Where is the line between freedom and oppression, and how do you know when you have crossed it?

Hidden amidst the beauty of Amsterdam along an unremarkable canal is a museum that tells an ugly story of terrible oppression.  The Anne Frank Museum Amsterdam at 263 Prinsengracht Street in Amsterdam is located in the house where the Frank family and others hid for 2 years during World War II and it is also the place where Anne wrote her famous diary.

Oppression does not happen overnight.  Oppression begins gradually, in ways that are so subtle at first that they hardly make a ripple in the stream of every day life.

Like minute variations in shades of grey, each a little darker than the last until the place and the hearts of its people have been completely overshadowed by a darkness that few people saw approaching.

Where is the line between freedom and oppression and at which point had the Jews crossed over it?  Maybe it was when authorities imposed boycotts against Jewish owned businesses?  Maybe it happened when their children were forced to attend Jewish-only schools?

As a final insult, they were required to wear yellow stars on the outsides of their clothing to mark their marginalized status.  Maybe this was the final step into the darkness of oppression?

Our visit to the Anne Frank House in Amsterdam brought home to me the reality of how terrible daily life gradually became for the Jewish people of Europe.

Approximately 90,000 Jews left Germany and took refuge in other countries before the start of the war in 1939.

By the time that many people realized how bad things would get, the war had started in Europe and for those Jewish people who were left like Anne and her family, it was too late to go.  Light gradually turns into darkness.  Hope slips slowly into despair.

Seeing the way that the Frank family and the others in the house were forced to live in an attempt to survive the horrors of Hitler’s sick campaign against the Jewish people and others that he found distasteful gave me a more personal insight into these events.  The Frank family went into hiding on July 6th, 1942.

Because they were in hiding above Otto Frank’s business, they had to sit in silence during the daytime hours for fear that the workers below would hear them.  The could not move or making any noise, nor run any water or flushing the toilet.

The curtains had to remain closed, making the small space that they hid in stuffy and oppressive feeling.  They could never go outside. Towards the end of the war, as food became scarce and hard to obtain, they started running out of food.

Despite their efforts and the efforts of their helpers, the Frank family and the others who were hiding were taken into German custody on August 4th, 1944.  Seven of the eight people in hiding at 263 Prinsengracht Street were murdered in the Nazi concentration camps.

Our visit to the Anne Frank Museum Amsterdam made me think a lot about the current world political state and things that I see happening in the United States today.

To be very clear, I am not making a direct comparison between today’s society and what happened during World War II, as the atrocities of that time are beyond comparison.  Our visit did make me take a hard look at the current status of the personal freedoms that so many of us take for granted today.

First, they started watching what we do and say by monitoring our internet and telephone usage.  Then, we were asked to take our shoes off and submit to full body scanning in order to travel.  Microchips in our ID’s to track our location at all times are probably just around the corner.

Hitler made everyone register their guns in much the same way as we are required to register ours today.  Once the war started, all of their guns were taken away as a measure of control.

Many times, these measures are being put into place “for our safety”. I wonder whether the Nazis told those that they were oppressing the same thing about the policies of control that they instituted, to make them more palatable to the population?

People did not see what was coming when Hitler took absolute power and control in World War II.  By the time that they realized the full scale of the wheels that had been put in motion, they were already so far down that path that is was too late to turn back or do anything about it.

How far down that path are we right now and do we know where the line is?  How many steps away are we from that type of oppression and what would have to happen in the world for that to become a reality again?

I think that our visit to the museum had exactly the effect that the curators intended; to make me think about freedom in a different way.

“We cannot change what happened anymore.  The only thing we can do is to learn from the past and to realize what discrimination and persecution of innocent people means.  I believe that it’s everyone’s responsibility to fight prejudice”  Otto Frank, 1970

Did you visit the Anne Frank Museum Amsterdam?  How did your visit change your views?

If you enjoyed this piece of writing about the Anne Frank Museum Amsterdam, you may also enjoy these other pieces:

8 Fun Things to do in Thun Switzerland: An Effortless Daytrip from Interlaken