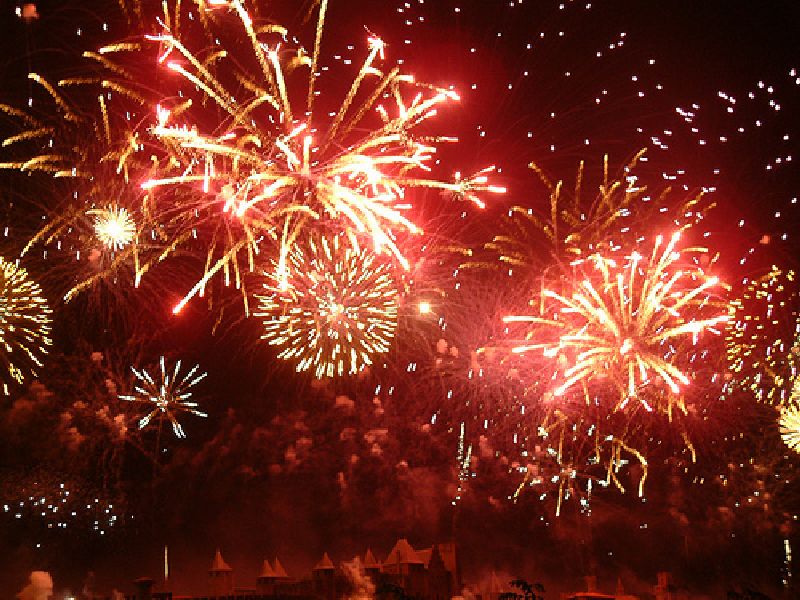 Bastille Day in Carcasonne France This photo is released by Footprint Books (http://www.footprintbooks.com) under Creative Commons.
***This post may contain affiliate links. Also, As an Amazon Associate I earn from qualifying purchases. Please see my full disclosure policy here for more information.

If you can’t make it to France for Bastille Day this year, check out these magnificent Bastille Day Celebrations happening in a city near you!

London: A Bastille Day celebration is taking place in and around the Borough Market on July 14th, 2012.  Check out special French offerings in the market, music, dancing and a street party taking place from 6:00pm-Midnight.

Minneapolis, MN:  There are numerous Bastille Day Celebrations happening around Minneapolis.  The biggest one may be the party being held by the Alliance Francaise at the Hotel Sofitel in Bloomington, MN.  What better way to celebrate Bastille Day than eating baguettes and pastries baked by the Sofitel’s French pastry chefs (they are the best that I have had outside of France.)  Classy music, classic car rides and childrens activities round out this kickin’ party.  Tickets are $10 in advance and $15 at the door.

If this isn’t your cup of tea, check out these other Bastille Day activities in and around Minneapolis!

Boston, MA:  The French Cultural Center’s 37th Bastille Day Party is being held on Marlborough Street in Boston on July 13th, 2012.  Franco-African music along with French food, drink and lots of dancing.  Tickets are $28 in advance and $35 day of (upon availability.)

Chicago, IL:  Chicago knows how to throw a party on Bastille Day!  Join the crowds in Daley Plaza for a giant Bastille Day block party complete with music, food, and a raffle for some great prizes!  The best part….ITS FREE!

St. Louis, MO:  The Alliance Francaise de St. Louis is presenting a lovely evening of food, drinks and french cinema on Saturday, July 14th in honor of Bastille Day.  Commencing at 5:30pm with a picnic followed by a silent French film.  The cost of the event is $35 and it includes a light dinner, 2 drink tickets and the film.

Milwaukee, WI:  Honestly, this is the last place that I would expect one of

the country’s largest Bastille Day celebrations to be held.  Wisconsin is right next door to me (relatively speaking), and as a fellow Midwesterner I can safely say that we are usually pretty boring around here.

Not so in Milwaukee on July 12-15, 2012 in Cathedral Square park where they hold a four day long celebration of all things French.  The party is free, some come join 250,000 friends for french food, music, vendors, street entertainment and a 40foot tall replica of the Eiffel Tower.  Wow.  Almost wish that I was going to be in Milwaukee instead of Carcasonne for Bastille Day 2012!

New Orleans, LA:  New Orleans is a city that still has deep connections to its French heritage.  The Bastille Day celebration in New Orleans is not just one day, but an entire week!  The festivities kick off on Sunday, July 8th with a French Mass.

Activities ramp us heading into the Bastille Day weekend.  A gala dinner and fireworks display are on tap for Bastille Day Eve on July 13th, followed by a whole day of fun on Bastille Day, July 14th.  Activities for the 14th include a French poodle contest, french market and cooking demonstrations, French music, kids activities and a block party among others.

New York City:  The Empire State Building gets a new outfit for celebrating Bastille Day in the Big Apple.  The iconic building is lit up in Red, White and Blue.

The biggest Bastille Day celebration in New York is held on 60th street by the French Institute Alliance Française.  The event is free.  Come for great music, a french themed market, cheese and wine tastings and kids activities (your kids can even play a round of Petanque!)

Orlando, FL:  An evening Bastille Day celebration is planned for the Audobon Park District in Orlando, Florida on July 14th 2012 starting at 6:00pm.  Enjoy French food and wine, a French market and a pet parade costume contest with prizes.  The cost of the event is $25 in advance/$30 at the door.

Philadelphia, PA:  This is perhaps the most dramatic Bastille Day celebration that I have thus far come across.

French Revolutionaries (toting muskets and in possession of a cannon) will gather at the Eastern State Penitentiary in Philadelphia to stage a reenactment of the storming of the Bastille.  Marie Antoinette will be taken prisoner, and as the is being led to the guiottine, she will proclaim “Let them eat Tastykake!” as thousands of cakes are tossed over the prison’s walls.

After victory is assured, the celebration continues in the form of a block party in front of the prison as well as into the neighborhood hearby where bars and restaurants will have special menus and festivities planned.

Anybody up for a revolution?

Seattle, WA:  The Seattle Bastille day festivities are taking place on Saturday, July 14th at the Seattle Center. This free event features music, food, wine tastings, fencing demonstrations, cooking demonstrations, kids story time in the garden and other kids activities.  Rick Steves “Europe through the Backdoor” presentation will be featured, as well as a Citroen exhibition.

Any special Bastille Day happenings going on near you?  Please share them in the comments!

What are your plans for Bastille Day?

A review of the Harvester Restaurant Chain in the UK

Travel In Focus: What to do in London