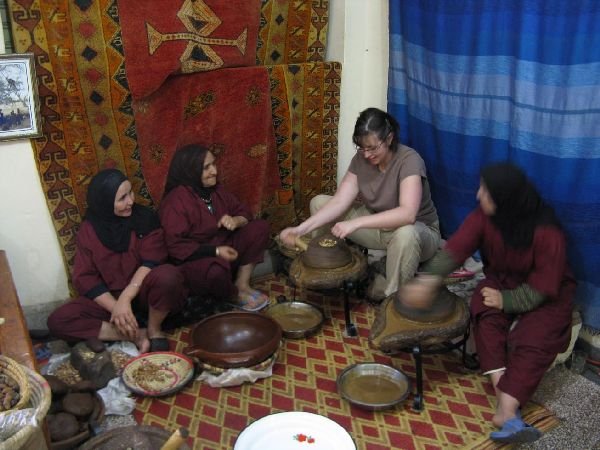 These women in Morocco work in a coop where they grind the seeds from the Argan tree into oil that is sold and used for the skin and hair. They let me sit with them and give it a try.
***This post may contain affiliate links. Also, As an Amazon Associate I earn from qualifying purchases. Please see my full disclosure policy here for more information. 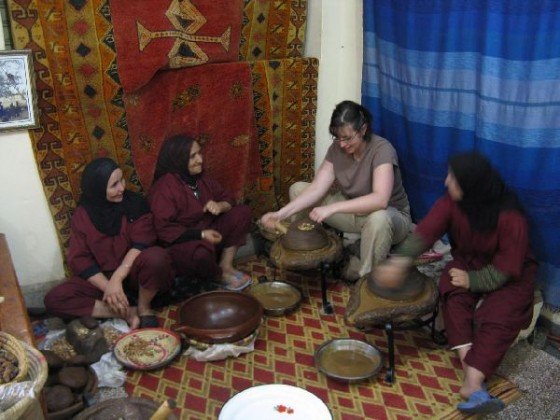 She admonished me first not to go (though she knew that wouldn’t be an argument that she would win.)  She then told us that she thought that we shouldn’t ride on the metro in Madrid, because terrorists often target subways for bombings.

My mother has never been to Europe, so she obviously had no idea how almost impossible it is for budget travelers to get around a big European city without using the subway.

More importantly, though, her worry made me think for a minute.  Was it really not safe to travel?  Were we going to be less safe in Madrid than we would be in a major city in the United States?

This is the conclusion that I came to.  I feel just as safe in most places in the world as I do here in my own backyward.  Of course, in any new place, you should always be aware of your surroundings and not take unnecessary risks, but I generally feel secure where ever I am.

This is what travel has done to my perspective.  I have seen that most people in the world are just like we are.  They have their joys, their fears, and are struggling to survive in this increasingly difficult to navigate world.  When I realized that most people were really a lot like me, this took a lot of my fear away in foreign places.

The media spends so much energy sensationalizing any negative story coming out of a another part of the world, and I think that this inaccurate picture painted by the media skews our view of other countries.

The only picture that my mother had in her mind of subways in European countries came from the media coverage of terrorist subways bombings in the last 10 years or so.  She did not have the rest of the picture to put those bombings into perspective.

The subway is a major mode of transportation for millions upon millions of people in the world on a daily basis.  There is almost no practical way to get around a major city in most of Europe WITHOUT taking the subway, and I am sure that most of those millions of people who take the subway everyday are not worried about imminent terrorist attack, and if they are not worried for their safety, then I don’t think I should be.

So, we went, we had a great time and like always, we came back whole and healthy.  Don’t let fear get in the way of your travel dreams.  The world really is mostly a friendly, good place.  Go boldly and without too much fear, seek to fit in and travel thoughtfully in foreign places, and in most cases, you will be just fine.

How has travel changed your perspective of the world?  Do you have a fear of travel?  Are your friends and relatives worried when you go out of the country, and if so, what do you tell them?

6 Ways Traveling with a Toddler Has Changed Our Travel Habits

Driving in France: How I Overcame My Fear of Driving in a Foreign Land