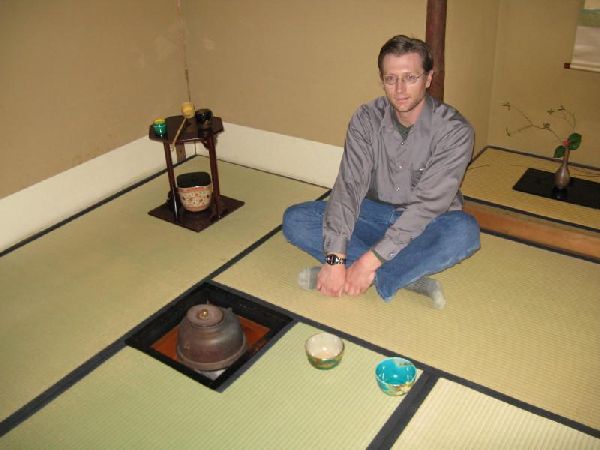 Aaron sitting in on the straw mats after our traditional Japanese tea ceremony in Tokyo
***This post may contain affiliate links. Also, As an Amazon Associate I earn from qualifying purchases. Please see my full disclosure policy here for more information.

Straw mats lined the floor, and soft light filtered in from the paper windows. Even though we were 7 floors up in a huge hotel in Japan, it seemed that we had been transported to a traditional Japanese tea house. There was a square hole in the middle of the floor which held the focal point of the space; an iron tea kettle that was heated from below. The sacredness of the combination of fire and water was evident in this ceremony as the water in the kettle was heated by the fire below.

She bowed her head in prayer before entering the room to serve us, an acknowledgment to the sacredness of serving others that is so valued in Japanese culture. We sat nervously, not sure what to expect but absolutely transfixed by the precise, delicate way that she handled the instruments used in the ceremony, handling each one just as delicately as a priest or monk would handle the sacred items of their faith.

She gave us cakes, and we nervously picked at them, unsure if we were supposed to consume them now or later (as beginners in this ceremony, we were gently reminded that they were for eating later.)

It was obvious that every single action that she performed was deliberate and had a purpose. No part of this graceful sequence seemed in any way arbitrary.

It was fascinating to watch the way that she folded the napkin in a very specific pattern and used it to wipe off each of the implements in the ceremony. They were clean, none of them were wet or needed wiping, but it seemed that she was acknowledging the sacred purpose of each in the dance that was about to take place.

The next thing that caught my attention was the way that she handled the dipper that was used to take the water from the tea pot at the center of the floor to the vessel where the tea was made. She handled it with a precision that was no less than the precision used by a Samurai using a sword. It was obvious that each aspect of handling the dipper had a meaning; how it was held, where it was placed, which direction the handle was pointing. It was never set on the floor; it was always resting on something else.

Next, bowls were given to us to use. She explained that each bowl had an important front side, and less important back side. The back side of the bowl was the side that we were supposed to drink out of. She continued her graceful dance of combining the tea powder and sacred water with a whisk to create the tea that was the focal point of the ceremony. When the tea was complete, it went into our glasses.

She instructed us to place the tea bowl flat on our left palm, and to use our other hand to turn the bowl ¼ turn twice, so that we would be drinking out of the appropriate side of the bowl. “Drink,” she said. When we were down to the last sip, she told us to make a slight slurping noise, as this was an audible demonstration that we enjoyed our tea.

Once we were finished, she started the process of putting all of the tools back to their starting places, like resetting a chess board for a new game. Indeed, it seemed like all of the sacred tools of the ceremony had participated in a carefully orchestrated dance and were returning to a place of rest after their exertions.

While it was obvious that we only got a small taste of the graceful dance that is the Japanese Tea Ceremony, it has whetted my appetite for more. It was a ceremony which demonstrated the beauty of grace and humility of the human spirit, and the sacredness of serving others. I think that there is real magic in bringing sacredness and a moment of peace and respite into the hectic nature of our daily lives, and I would love to experience this ceremony again someday, hopefully in more detail.  We really enjoyed our Japanese tea ceremony Tokyo .

Here are three places in Tokyo, Japan where you can have a similar Tokyo tea ceremony experience:

My first Thai Massage in Thailand