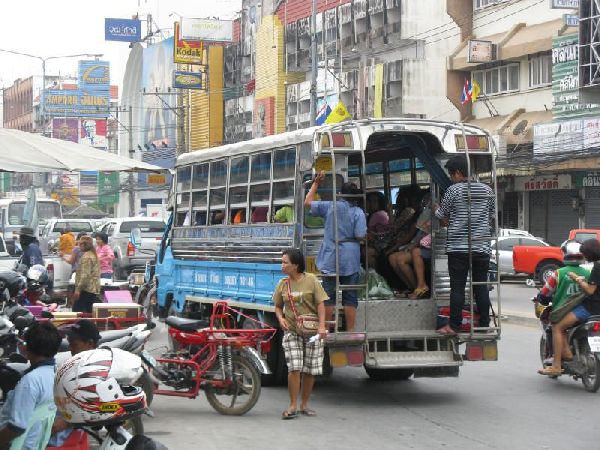 Taxi: This was generally our preferred method of getting around in Thailand, when it was available. They were more comfortable to ride in than either of the options listed below, and generally didn’t cost too much more.

Taxis were abundant in Bangkok. Just outside of the airport there are designated public taxi stands where the attendant will write your destination on a piece of paper in Thai to give to the driver.

From the Bangkok airport, the taxi meter should start at 35 baht (this is regulated by the government). There is also a 50 baht airport surcharge that will be added on to your total. Depending on the route the driver takes, there may also be some tolls (these were generally minor and added up to about 70 baht for the couple taxi rides that we took.)

I offer you a warning to help you avoid a mistake that we made. The taxi driver in Bangkok may quote you a flat rate and make you think that because of tolls and other factors that this is cheaper than the meter. It generally isn’t cheaper, and could be significantly more expensive.

We just said yes once because we didn’t know, but we later discovered that all Bangkok taxis follow the same fare chart based on mileage. It is probably cheaper for you to have him run the meter. If you are not sure, figure out how many kilometers you are going and calculate the approximate fare bases on the Bangkok taxi fare chart (located about halfway down on this page which also has some other good advice for taking a taxi in Bangkok).

One last tip for Bangkok taxi rides from the airport-do not give the driver your portion of the white slip that the taxi attendant will give you. There is nothing on it that he needs (he already knows where you are going). It is for you, in case you have problems or leave something in the taxi.

In Chiang Mai, taxis were available at the airport, but were harder to find in the city. We found a great private car service with higher quality vehicles to take us from the airport to the train station in town for about $4. If you do take a taxi from the airport, see if they will give you their card in case you need a taxi in town later during your stay. 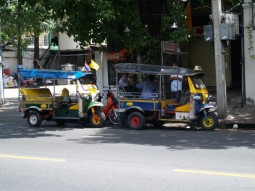 Tuk-Tuk: Ah, yes, the infamous Thailand tuk-tuk (so called because of the
puttering noise that the inefficient two stroke motor makes as you speed along.) We rode in a tuk tuk so dubious that it died every time the driver stopped at a corner and he had to restart it!

For us, this was the second best option for getting around town. The tuk tuk cannot go on the open highway, so it is only for trips that are within town or just outside.

The fare for the tuk tuk is supposed to be negotiated and the drivers will automatically charge you too much. Honestly, some of the time I was just sick of negotiating and I just took the fare that the driver offered as I just didn’t have enough energy to haggle over a dollar or less. When we took a tuk tuk to the airport in Chiang Mai, we knew that he was charging us too much, but we were in a huge hurry, so we just said yes and got in and went.

The most we ever paid for a tuk tuk in Chiang Mai was 150 baht, and that was to take us from the old city all the way to the airport.

Songthaew: Roughly pronounced “Song tow”, this is a Thai transportation staple and one of the worst experiences that we had in Thailand.

A songthaew is basically a pickup truck with an extra tall topper and benches on both sides of the back. Think of it like a shared ride taxi service. The driver picks people up throughout the city, then drops them off at their destinations in whatever random order makes sense at the time.

Some songthaews only follow one route, and they only pick up passengers from one place to take them to another (for example, the songthaews at Doi Suthep in Chaing Mai only take people from there down the mountain to the arboretum, where you have to hook up with a different songthaew to go elsewhere.)

The back of the songthaew is open, and this unfortunately creates a vacuum that sucks the exhaust right back into the back of the pickup, where you are sitting. It gets trapped there because the windows in the sides aren’t big enough for it to flow out again. It can be very toxic, and Aaron got really sick to his stomach from all of the songthaew rides that we took. If you have to take one and you are sensitive to noxious fumes, it is sometime possible to ride up front in the cab with the driver.

Songthaew rates are generally not negotiated, and 20 baht for a ride within the city seemed to be the norm. For two people, it is usually not too much more expensive to catch a tuk tuk and go straight to your destination, and this usually seemed preferable to us, if possible, rather than taking another toxic ride from hell.

Car and motor bike rental:Given what I saw of the driving habits of drivers in Thailand, this is not an option that I would recommend for a short visit. While we saw very few accidents, the roadways seemed very chaotic and until you have time to figure out the underlying traffic patterns and unstated rules, it is probably best to leave driving to someone else (particularly because transport in Thailand is so cheap…it is just not worth it to figure out yourself.) 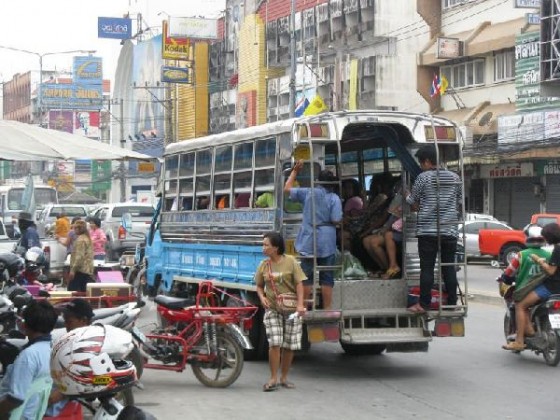 We took a public bus out of Chiang Mai to and from Chiang Dao. It was easy and very cheap (about $1 for each of us for a 90 minute ride) and you def intely get a taste of what local life is like on a public bus or train.

The train that we took from Bangkok to Ayuthaya cost only a couple of dollars. We rode in third class, which was cheap but unfortunately on the way home meant standing room only for 2 hours (we were told that the reserved seats in first and second class need to be booked days ahead of time.)

Airplane:  Airplane tickets  can be surprisingly inexpensive in Thailand (still more expensive than bus or train, but is your are on a tight time schedule or have only a short time to spend, a 1 hour flight instead of a 6 hour bus ride can be a great thing)

Looking Down the Road: Two weeks in Thailand