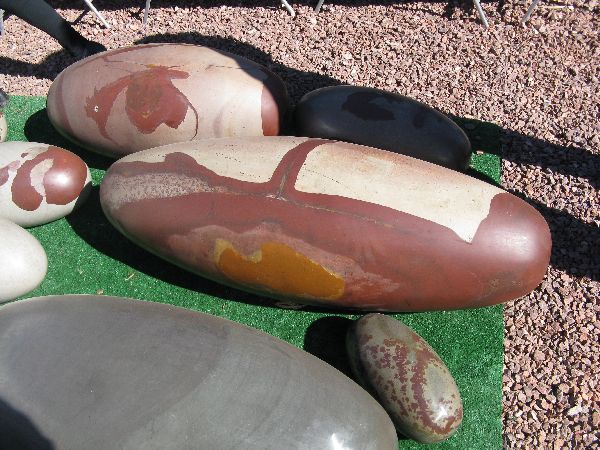 Be sure to check out my other great posts about planning your trip to the Tucson Gem Show here!

The Tucson Gem and Mineral Show is actually a collection of individual shows located all over the city. In general, the main categories of items that you can find at the Tucson Gem Show include rough and specimen stones, beads, jewelry (both expensive jewelry and less expensive jewelry made out of lower grade stones), imported items, carved healing stones, large display stones and crystal cathedrals, and home décor.

If you only have a short time in Tucson to get a good taste of the show and to get things checked off your shopping list, this is the best place to start.

Hotel row is located near downtown Tucson and and convention center. It is a stretch of hotels on the west side of I-10 that is about a mile long. Most of the hotels pull the furniture out of their rooms and rent them to gem vendors who in turn take the rooms and turn them into little temporary stores for the show. In addition, the hotel courtyards are filled with vendors, as well (and I think that the deals tend to be better in the courtyards, as I would imagine the rent is cheaper.)

The north end of hotel row is anchored by the Days Inn, and it finishes up on the south end near the Howard Johnson and the African Village. In between are days worth of stones for you to discover and hidden corners to explore.

An Overview of Hotel Row and Tips About my favorite spots:

The hotels on the south end of hotel row generally have more of a “new age” theme to them (including the Clarion and Howard Johnson and others in their vicinity, south of the River Park Inn). It has been my experience that often times, they also have higher prices because of the market that they are catering to, but good deals can be found and often times the rooms in these hotels are rented out by healing practitioners of varying sorts, so it can be an interesting way to learn about different healing techniques.

The Hotels on the north end of hotel row mainly include the River Park Inn and the Days Inn, but there are open spaces and parking lots between these two hotels that are filled with tents of vendors as well (and it is sometimes in these alleys between the hotels that you can find good deals).

In front of the River Park Inn on the south end of its parking lot is a large tent. At one end of this tent are Usman Imports, and they have awesome prices and a great selection of Onyx carved into various shapes (including plates and bowls that I have been drooling over because I would love to have them in my house for table ware.)

At the other end of this tent is a great vendor to buy gifts items from (they have tumbled stones by the pound, soapstone oil burners and candle holders, inexpensive jewelry and fun, cheap stones for the kids.)

For me, it is the courtyard of the Days Inn where all of the action is at (with he exception of the Baltic Amber dealers from Poland that are always located in the lobby). The courtyard is where the vendor is that I buy my Shiva Lingham stones from, and many of the vendors in this area specialize in stones that are shaped into wands, spheres, ovals and other shapes that are useful for healers and massage therapists.

The parking lot on the south end of the Days Inn building is filled with tents of vendors selling stones. The vendor on the north east corner of this lot with the giant amethyst cathedrals is where we have purchased enhydro agates in the past (agates that are not cut and still have water inside them).

The rest of the tents in this area and stretching down filling in the spaces in between the Days Inn and River Park Inn have a good selection of rough stones, carved stones and other goods imported from all over the world. You can find some interesting items and good deals here.

The Most Memorable Things to do in Omaha With Kids

5 Things I CAN’T Travel Without

The ULTIMATE carry on bag!

Useful for charging devices in the car.

Charges all of our tablets in one outlet!

Essential for helping the kids adjust to jetlag.