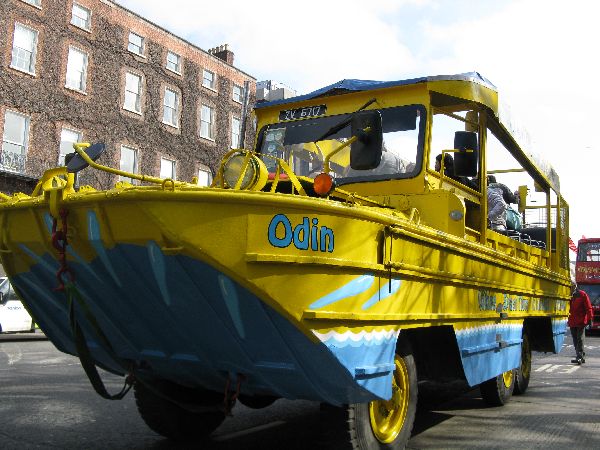 Are you looking for suggestions about what to do in Dublin ?  I have a great one.  I can point you in the direction of the very best tour in Dublin.

Hands down, the most entertaining, enjoyable tour in Dublin (and one of the best tours that we have ever been on anywhere, for that matter): Viking Splash Duck boat tour.

I have never been on a duck boat tour before. In my mind, I had relegated a duck boat tour into that category of things that I normally avoid because they are  too touristy and too cheesy for our general tastes.  Boy, did this tour prove me wrong!  I will never think of a duck boat in the same way again!

Viking Splash tours offers a unique tour that is different than anything else that we had ever experienced. The tour combined an overview of Dublin with a splash of Viking history, all in an amphibious vehicle from WWII.

Upon boarding the duck boat, we were all informed that we were now Vikings (we were even given funny hats!) As vikings, of course, we don’t like Celts, competing tours companies and especially unsuspecting tourists reading maps and talking on their phones.

As it is illegal to use weapons in the modern age, the only weapons that we had against these “enemies” were our viking roars. As we drove around, we had a lot of fun startling unsuspecting victims with our loud warrior cries!

Aside from the Viking fun, the tour guide and driver was highly engaging and entertaining, and he really seemed to enjoy what he was doing.

After a nicely narrated drive around Dublin with bits of history and odd and interesting trivia thrown in (did you know that the oldest street in Dublin is called New Street?), we proceeded into the water for a tour around a man made lake where we saw the U2 recording studios, the oldest boat in Dublin and the European headquarters of both Facebook and Google (ironically located right across the water from each other.)

One of the most interesting parts of the tour explained the history of the duck boats themselves. The duck boats were made in Michigan during World War II. Because all of our boys were over fighting in the war, the boats were made by women. Rosie the Riveter obviously did a solid job on the boats, as we learned that they were only built to last for 6-8 weeks, and the boats are still in operation today on tours all over the world.

Our Viking Splash Duck boat tour was an unexpected highlight of our trip.  It gave us an entertaining overview of Dublin from a unique perspective.  It is an engaging tour that will appeal to young and old alike.   If you are wondering what to do in Dublin, this is the one thing that I can confidently recommend to you.

The Best Hostel in Interlaken for Families – Backpacker’s Villa Sonnehoff